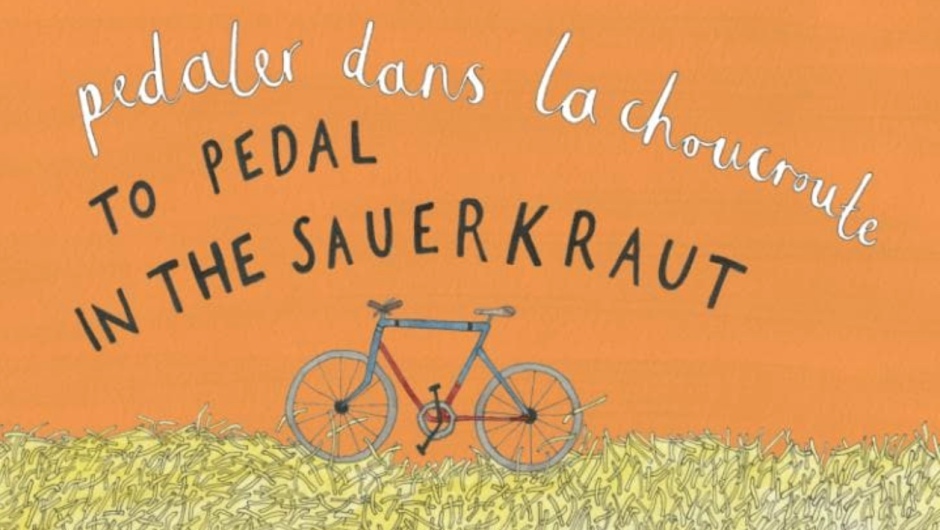 ‘Pedaler dans la Choucroute’, I discovered this french phrase in a charming illustrated book, recently released  – Speaking in Tongues: Curious Expressions from around the World, by Ella Frances Sanders.

The French are partial to an idiom, this one translates as ‘Pedalling in Sauerkraut’. It creates an amusing image and the little book explains that it means to be at a complete lost, or to have lost the train of ones thoughts. I understand that the phrase can also be used when talking about devices such as a computer that is busy whirring without achieving anything.

The origin of ‘Pedaler dans la Choucroute’ comes from the early Tour de France days. The broom wagons used to follow the cyclists to ‘sweep up’ stragglers or those who are unable to finish the day’s stage in the allotted time, often featured billboards advertising sauerkraut.

This got me thinking about the billboards I see regularly, and what idioms may have arisen if today’s broom wagons should also carry advertising. For many months I passed a huge advertisement on my way to work advertising Triumph Bras – Pedalling in Triumph? Catchy but not sure what it would imply.

I don’t really know where I’m going with this post, but I can’t resist a good idiom, so probably best for me ‘to get on my bike’.