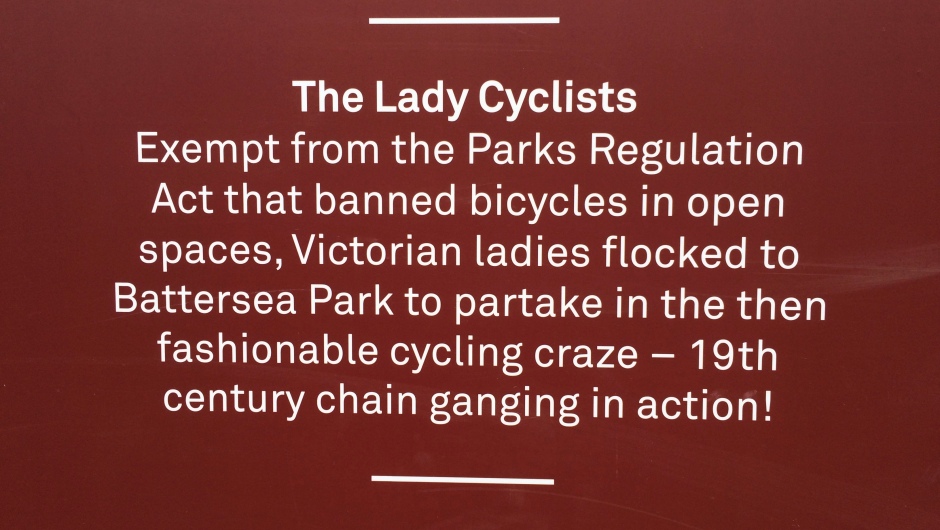 This Friday, the Mechanic and I went out for breakfast before work, which then resulted in me taking a slightly different route to the office. Regretfully my daily commute is mostly with four wheels rather than two, and as is the norm when driving in London during rush hour, much of the 30 minute journey was stationary. So I found myself sat a different set of traffic lights, where I noticed the following, printed on a hoarding surrounding a building site.

I have no idea why this reference to Victorian leisure pursuits is neatly printed next to pictures of luxury flats. Possibly the marketing department of the development wish to imply to a potential buyer that their new home will have a view of the park. I doubt this would be possible unless the apartment block is fifteen stories high, and they purchase  the penthouse and use binoculars.

When I got to work, curiosity got the better of me, and I had a search on the internet. (Note to employer, I arrived early, and would not dream of surfing the net in working hours.). I gather that when the cycling craze began in the late nineteenth century, bicycles were banned in the royal and municipal parks, however through some accident of legislation Battersea Park was exempt. As a result fashionable middle-class Victorian ladies took to taking morning rides in the park. I think the invention of the bloomer also had something to do with it.

When ladies at first took to wearing the Bloomer,
They only would venture abroad in the dark:
But now they imagine it excellent humour,
To cycle by daylight to Battersea Park.

This morning I rode over to Battersea Park, and I can imagine the park did indeed make the perfect cycling enviroment for a Victorian lady. Smooth surface paths, running alongside the river, shaded by trees, a cafe for tea and cake and a sub-tropical garden.

Just to be clear I didn’t try and re-live the 1895’s, no bloomers for me, I was sporting my twenty-first century lycra kit. Although it did make me think about tomorrow, tomorrow is the Rapha Women’s 100. Rapha are encouraging women worldwide to take to their bikes and ride 100 kms.

Tomorrow I will ride 100 kms,  and I will have a chain gang, but unfortunately not women – the Mechanic, his mate Big Al, and maybe the Geordie.

See Sheila Hanlon for more about the Victorian Lady cyclists.

Good luck to anyone doing the Rapha challenge tomorrow.